In the town of El Pi de Sant Just, in the Solsonès region, central Catalonia, there is an anti-aircraft shelter from the Civil War that was built to defend the local population from the Francoist bombings in 1938. Now, 80 years later, its use is quite different. It is the resting refuge of a few species of bats, very necessary to combat pests such as the pine processionary, the tiger mosquito or the boxwood caterpillar. 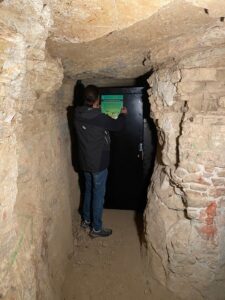 David Guixé, CTFC researcher, installing an information sign on the new door of the bomb shelter to inform visitors of the presence of bats.

To further promote the use of the refuge, researchers from the Forest Science and Technology Centre of Catalonia (CTFC) have advised the local council on the type of closure to put in order to reduce the disturbances caused by visitors. The Clariana de Cardener City Council has installed a door in the side tunnel called the powder magazine (where material and weapons were kept), the area where bats are found. This door does not reach the ceiling, thus allowing bats to enter and exit without difficulties and at the same time offers them a quiet and safe space inside the bunker. Stands have also been installed to track colonies over the long term with phototrapping cameras and acoustic ultrasound recordings. Over time, more bats are expected to establish themselves in the refuge, form colonies and have their young.

This action has been carried out within the framework of the ForRest (Forest Restoration) project, led by the CTFC. Among its many performances there is a study action to see to what extent bats and insectivorous birds are controllers and consumers of the pine procession. For this, bat and bird boxes of various models have been installed for different species, their occupation is monitored, and their diet is studied through genetic analysis. On the other hand, forest improvements are being made, such as opening clearings within the forest and providing underground shelters for cave bat species that would never occupy the bat boxes, and thus favoring the populations of bats in the area. In return, the bats will help us suppressing nocturnal pests’ populations.