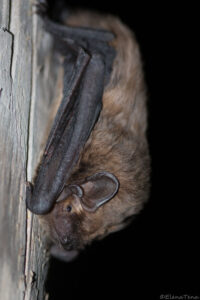 There is a lack of studies designed to detect the most important areas for bat conservation. In this context, areas of high bat activity have been rarely considered in the delimitation of protected areas for bats, which are generally focused on the protection of roosting sites. This has been due to the difficulties of sampling the distribution of these nocturnal animals when moving at night. This methodological constraint has been overcome by the development of bioacoustic sampling, which allows mapping the occurrence of active bats over large areas. In this study, we use bat detectors to sample the distribution of bat activity in central Spain. This region is under the environmental effects of a mountain range (Guadarrama Mountains) and the urban encroachment of the city of Madrid. The occurrences provided by the detectors were used to produce species distribution models of which the resulting layers were arranged to detect the most suitable areas for bat richness and rarity indices. We performed a gap analysis to explore whether the areas most commonly used by active bats are covered by the current network of protected areas. The results showed that the best areas of high bat activity are located at the piedmont of the mountains and that most of these areas overlap with the existing network of protected areas. The best areas for bats excluded the most urbanized areas and within a similar urban gradient, protected areas tended to be located within the best sites for conservation. These results suggest that bats currently benefit from a network of protected areas initially aimed to protect birds and habitats (Natura 2000). In addition, monitoring areas of high bat activity could complement roosting site protection in the conservation of bat assemblages.

Click this link to see the published article here: https://zslpublications.onlinelibrary.wiley.com/doi/10.1111/acv.12719 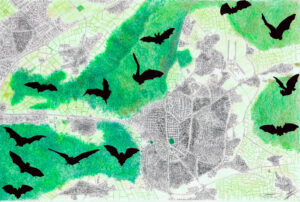 Drawing from Daniel Truchado and David A. Oropesa.