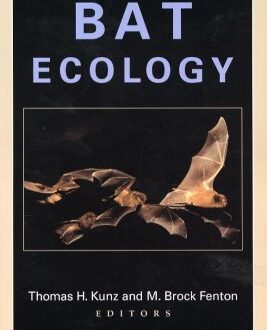 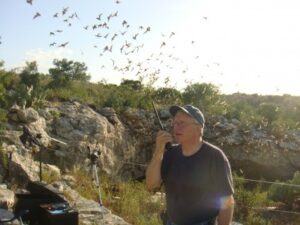 Photograph from the Center for Ecology and Conservation Biology, Boston University.

From SECEMU, we would like to remember the life of Prof. Thomas H. Kunz who died from COVID-19 the past 13th April. It is difficult to summarise what Prof. Kunz has meant for the study and conservation of bats. Since his PhD in 1970, over 240 scientific papers are the result of his exceptional work capacity, interest, and curiosity. In the 80s he brought together various researchers and edited two essential books: Ecology of bats, (1982) and Behavioral methods for the study of bats (1988), which taught many of us the basic skills of setting up nets, making bags or handling a bat, as well as understanding unique aspects of bat biology such as thermoregulation or energy efficiency. These were followed by several other books essential for understanding the development of the current knowledge of the ecology, behaviour and conservation of bats. His constant curiosity and ability to collaborate with other disciplines, led him to open new lines of research, ahead of what the rest of the scientific community were doing. Thus, he was a pioneer in the application of heavy water for energy studies, or of thermal cameras for counting and monitoring large colonies, or in the use of radars for the evaluation of the impact of wind turbines on migratory bats. This privileged perception, finally led him to the creation of a new field in ecology: Aeroecology, focused on the study of the aerosphere, as a fundamental component of the biosphere, and in which disciplines as disparate as biology, physics, chemistry and meteorology merge, opening a new dimension to the study of natural phenomena.

Prof. Kunz’s scientific career was recognised with numerous scientific prizes and accolades. Among them, the one he would have appreciated the most, was his appointment as an honorary member of the American Society of Mammalogists (ASM). The highest distinction of a society that he helped grow and presided over for years. It was on the way out of the ASM annual meeting in 2011, that a terrible accident cut his brilliant career short.

But above all, those of us who were lucky enough to deal with him personally, will remember him for that innocent and jovial smile that remained from his time as a school coach.