A new campaign called #DontBlameBats has been launched to dispel widespread unfounded fears and myths about bats which are threatening conservation during the pandemic.

A 4-minute animated created by Clara Prieto on behalf of the Spanish Association for the Conservation and Research of Bats (SECEMU) with input from the UK’s Bat Conservation Trust (BCT) explains important differences between infectious SARS viruses in humans and similar viruses in wild animals. It also highlights the benefits that bats bring to humans and ecosystems.

COVID-19 is a human disease and people are responsible for its transmission to other humans around the world, not bats or other wildlife.

Javier Juste Ballesta, IUCN Bat Specialist Group of Doñana Biological Station (CSIC) said for The Conversation: “Bats are mistakenly blamed for causing the COVID-19 pandemic. Despite the current coronavirus only ever having been identified as a human disease, bat popularity has dropped during the pandemic, with endangered bats being culled in China, Indonesia and Peru, amongst other places, in a misguided attempt to stop the spread of the SARS-CoV-2. This practice is cruel, unnecessary, ineffective and detrimental to bat conservation.”

Dr Jose Nunez-Mino, BCT’s Director of Communications and Fundraising said: “Bats are some of the most misunderstood and undervalued animals on earth. This latest wave of misinformation is increasing the fear of these wonderful mammals and undermining our efforts to protect them so that future generations can enjoy both watching them in the night sky and benefiting from everything they do for us – from eating insects to helping with tropical forest reforestation. Bats are our friends. We are very pleased that SECEMU have asked us to partner with them on the Don’t Blame Bats campaign so we can work together on this important issue.”

Furthermore, protecting wildlife means protecting us. Evidence shows that bats and other wildlife persecution has the potential to make public health worse, not better, with activities such as deforestation, intensive farming and the wildlife trade all increasing the risk of disease spill overs from wildlife to people. For cross-species infection to happen, a pathogen must overcome a series of ecosystem barriers. If we fail to care for the natural world, those barriers which help resist infectious disease spill overs break down. 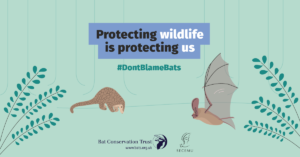 So what did cause the pandemic?

The truth is no-one yet knows. The only known way of contracting COVID-19 is from another human. Scientists have described hundreds of different viruses in the Coronavirus family, including four human coronaviruses that cause the common cold. Some viruses in this family can be found in birds and mammals. However, none of the coronaviruses known to cause disease to humans, including SARS-CoV-2, have ever been detected in any of the world’s 1,400 bat species. The current virus and a similar bat coronavirus may have separated from a common ancestor – in an unknown species – around 40 years ago.

One coronavirus with 96% of its genome in common with SARS-CoV-2 has been found in a single species of bat (Rhinolophus affinis) in China. This similarity may sound significant, but to put it in context, we share 96% of our genome with chimpanzees but we are not the same species.

Why should we care about bats?

Bats account for over 20% of the word’s mammal species and they play vital roles in ecosystems. In tropical countries, many plants and crops rely partly or wholly on bats to pollinate their flowers or spread their seeds. European bats feed mainly on insects, some feed on spiders and one species feeds on fruit. This brings many benefits to humans, like helping to control insects, some of which can damage crops and gardens and carry diseases such as malaria. Bats deserve our awe and wonder, but many species are endangered or under threat from human activities.

We are appealing to people to share the video and banners as widely as possible, along with the campaign hashtag #dontblamebats. With your help we can reach, educate and empower more people so we can take care of bats, other wildlife and each other. 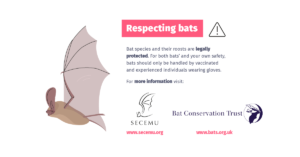 The Spanish Association for the Conservation and Research of Bats (SECEMU) is a non-profit national organisation which brings together people interested in conducting research and developing conservation activities in relation to the bats of Spain, with a particular emphasis on promoting their protection.

We carry out specific studies on the distribution, censuses and ecology of bats in Spain, do monitoring of threatened populations and proposes measures for their appropriate conservation. We also publish the annual Journal of Bat Research & Conservation in order to showcase bat studies among scientific public and we participate in numerous activities to raise awareness and inform the general public about the problems affecting bats and their beneficial roles they play in ecosystems.

BCT are the leading NGO solely devoted to the conservation of bats and the landscapes on which they rely. We work closely with many organisations including over 100 bat groups across the UK. Bats are unique and play a vital role in our environment but during the last century bat populations suffered severe declines. We are working to secure the future of bats in our ever changing world by tackling the threats to bats, from persecution to loss or roosts and changing land use. As the authoritative voice for bat conservation we work locally, nationally, across Europe and internationally.