Today’s press mentions a recent article published in the prestigious scientific journal Nature Communications about the isolation of the Lloviu filovirus in Schreiber’s bats (Miniopterus schreibersii) from Hungary. https://www.nature.com/articles/s41467-022-29298-1. 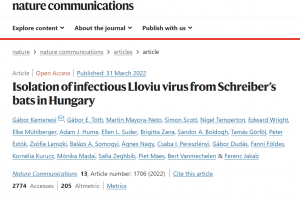 The Lloviu filovirus was first described in Spain in 2011, from archival samples from a mass mortality event of Miniopterus schreibersii that had affected various populations of this species in France, Spain and Portugal. The individuals investigated came from Lloviu Cave in the Asturias of northwest Spain, hence the virus’ name. https://journals.plos.org/plospathogens/article?id=10.1371/journal.ppat.1002304

These bats presented significant viral loads in various organs, particularly in the lungs that were the most affected according to pathological anatomy studies, and thus pointed towards a Lloviu filovirus infection as the most plausible explanation for the mass mortality event in the absence of stronger hypotheses. The sequencing of the detected virus placed it within the Filoviridae family, of which two genera were known, Ebolavirus and Marburgvirus, both with viral species related to outbreaks of sever haemorrhagic fevers in Africa. The Lloviu filovirus was subsequently classified as a new genus within this family (Cuevavirus). Two main questions remained unanswered. 1) Whether it had pathogenic potential for bats and, especially, for humans?; and 2) What was the nature of its reservoir, since the fact that it had apparently caused massive and rapid mortality in M. schreibersii did not seem compatible with the high degree of mutual adaptation that usually characterises the relationships between a virus and its natural host? This virus was subsequently detected again in Hungary in 2016, also in association with a mass mortality event in Schreiber’s bats. https://www.tandfonline.com/doi/full/10.1038/s41426-018-0067-4

In a later study, the frequent presence of antibodies against this virus in healthy Schreiber’s bats captured in the northern Spanish regions of Asturias and Cantabria in 2015, evidenced that viral infection was frequent and did not always lead to mortality events. Thus, it is more likely that these bats are the natural reservoir of this virus. https://www.mdpi.com/1999-4915/11/4/360. Antibodies against the virus were also searched for in serum from 22 people with a history of capturing and handling this species of bat, yet none could be found. In a later study in response to previous unsuccessful attempts to cultivate the virus, a group of researchers from Japan managed to isolate the live virus from its genetic sequence using reverse genetics. Obtained in this way, the virus was shown to be capable of infecting cells of various mammalian species, including humans. https://journals.asm.org/doi/10.1128/JVI.02265-13.

In the most recent study, which has been reported in the media today, the authors detected not only antibodies, but also the virus genome in the organs of M. schreibersii carcasses and in the blood of healthy individuals, as well as in ectoparasites collected from the same individuals. This demonstrates that the virus is capable of infecting this species of bat without causing disease and, therefore, that it is very possible that it is its natural reservoir. They were also able to isolate the virus from the blood of infected bats in cells of M. schreibersii, but not in those of other mammalian species. The cultured virus obtained in this way at high concentrations, was then shown to be capable of infecting the cells of other mammalian species including those of human origin. 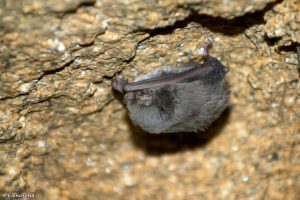 Given the above, the following facts must be highlighted:

There is therefore no evidence to date to suggest that bats can transmit the Lloviu filovirus to humans, or that it constitutes a threat to public health. Any statement in this regard is speculative and can therefore only be admissible as a hypothesis.

Bats play an essential role in the natural control of insect populations, being our best allies in vector control of infectious diseases and in reducing the use of pesticides, which are harmful to health, for pest control. Bats are therefore extremely beneficial to human health.

Why are bats important?